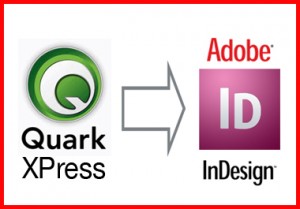 Have you moved on from Quark XPress to Adobe InDesign like herds of other graphics professionals? Are some of your files still stuck in Quark, but it would be too time consuming to rebuild them in InDesign? Well, you’ve come to the right place!

I will convert your file from Quark versions 3.0 to 18 to Adobe InDesign. There are a few things to be aware of, however. Local formatting (bolding, italicizing) will be lost since InDesign doesn’t support it. You may get reflow due to the various differences in the way Quark and Indesign handle font spacing. Some features/effects of later versions, like drop shadows, may not correctly carry over to the new InDesign file and may need to be recreated. Also among other things, ligatures, Quark applied styling and runarounds can be problematic.

Click here now to get your Quark file converted to InDesign for only $5.00

If you are interested in having me do something beyond the scope of the Fiverr gig, or if you have some prepress/print production work you need, please click here to contact me.